Chambers & Company was awarded 2014 Deal of the Year by China Business Law Journal for our role in advising China National Nuclear Corporation (CNNC) on its acquisition of a 25% interest in Paladin’s Langer Heinrich Mine (US$190 million) in Namibia from Paladin Energy Limited. We were co-counsel on this project with the Chinese Law Firm, Dacheng Law Offices.

Chinese Embassy Publication entitled “How to Invest in Australia”

At the special invitation of the Ambassador of the People’s Republic of China to the Commonwealth of Australia, His Excellency Ma Zhaoxu and the Chinese Embassy in Australia, our law firm contributed a key chapter in this publication on the Australian Foreign Investment Regime.

The publication was issued by the Chinese Embassy in China and is intended for reference by Chinese State Owned Enterprises and private corporations investing in Australia.

To view a copy of the chapter, please click HERE.

17 October 2014 marks the 30th anniversary of the establishment of Chambers & Company and our law firm’s appointment by the Chinese Government as the lawyer on the AUD$420 million Channar iron ore joint venture with Hamersley Iron in October 1984.

The Channar project is recognised as China’s first overseas project. A letter of entrustment was signed on the day for our appointment signed by Mr. Zeng Junwei, the inaugural chairman of China Global Law Office and Mr. Jiao Yushu, president of Anshan Steel Research Institute representing the Chinese steel industry.

After extension negotiations, the Channar joint venture was extended for a further five years in December 2010. Mr. Chambers AO is still continues as a Director of Sinosteel’s holding companies for this project and represents Sinosteel on the Policy Committee of the joint venture. Today the Chinese interest is held by Sinosteel Corporation.

See our press release in The Australian newspaper HERE.

Our Senior Partner, Mr. Robin Chambers AO chaired the opening session of the Ministerial Mining Summit as part of the International Mining and Resources Conference (IMARC) held in Melbourne in September 2014 at which the Australia Deputy Premier, Mr. Peter Ryan delivered the opening address.

For further information on the event, please click HERE.

Mr. Chambers AO was appointed to be an inaugural member of the council to contribute his “unsurpassed experience in China”. 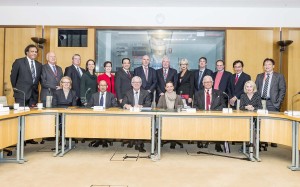 The Hon Andrew Robb AO MP with the the Trade and Investment Policy Council in Parliament House Canberra, 6 June 2014

To view the Media Release for the strategic alliance, please click HERE.

Mr William Wu, Vice Chairman of GID, said in relation to the proposed alliance that:-

“As we expand our operations into Australia and the global resources industry, we look forward to working with this Australian law firm, Chambers & Company which has a 30 year history of representing Chinese State-Owned Enterprises on their international projects”.

For the alliance, Guoxin International has appointed Chambers & Company as its lawyers to act as its general legal counsel.

Chambers & Company was privileged to host the members of the Board of Directors of Sinosteel Corporation, lead by President, Mr Jia Baojun and other senior Sinosteel officials when they visited Melbourne in March this year.

The long standing relationship between our law firm and the Sinosteel Group stems back to the Channar Joint Venture in 1984, which we are pleased to see continues to be one of China’s most successful overseas iron ore mining joint ventures to date. Chambers & Company are honoured that our firm continues to remain closely involved with this model joint venture for Chinese investment in Australia.

In March this year, our Senior Partner, Mr. Robin H Chambers AO, was honoured to be appointed as the “Economic Expert to the Expertise Panel” with the Chinese Consulate in Melbourne.

Our firm was appointed in conjunction with China’s largest law firm, Dacheng Law Offices as the lawyers to advise China’s largest nuclear power company, China National Nuclear Corporation on the acquisition of 25% interest in Paladin’s mining project in Namibia. This project was signed in Perth in March this year.

The award of Office of the Order of Australia (AO) in the Queen’s Birthday Honours List for “his distinguished services to Australia-China relations, particularly through the promotion of trade and investment relationships in the minerals and metals sector, and as an adviser on international corporation law”.